When a Song Triggers a Memory 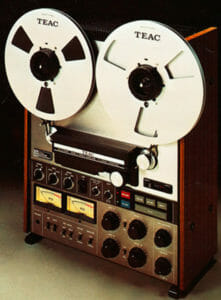 You know – when you hear a song that triggers a memory and then you are instantly transported back to that moment in time?

The other night my youngest was at the house. She is learning guitar. Every now and then, she’ll come over and show me a new song she is learning. We’ll play around and I’ll show her a trick or two and help her with any areas she’s struggling with.

She shared a new song she loves by a band she listens to called “The Milk Carton Kids.” The tone of their voices and the melody of this particular song just reminded me so much of Jackson Browne. I used to listen to him all the time in the 70s and 80s. A lot of his songs are a bit melancholy. The next thing I know, my mind is back in 1983, right before I met my wife. At that point in my life, I was so incredibly lonely. I yearned to find the “one” for me and I struggled to make it through each day without her.

To side step a little here – back at that point in time, I used a reel-to-reel (picture for those of you who don’t know what that is). I would record all of my favorite songs onto the reel-to-reel and then play them back literally one bar at a time so I could dissect and learn each and every note the artist played. That is how I taught myself the finger-style guitar playing I do. Now all you have to do is go on YouTube to watch someone’s live performance to see what they are playing.

Anyway – I had Dan Fogelberg’s “To The Morning” recorded and every morning when I woke up, I would stumble out of my bed, throw on the reel-to-reel set to play this song, then stumble back to bed until the song was over. Then I’d drag myself out of bed to face a new day. The song basically talks about the idea that a new morning will dawn with the start of each new day, filled with all types of possibilities. The main chorus line says:

Somehow, it was my anthem. I played this song literally every single morning for weeks, up until the time that I met my wife. And then my entire outlook on life changed and I don’t think I played that song again until the other night when I found it for my daughter.

It’s funny how a song can be so indelibly attached to a memory. And how hearing that song can bring that memory back from the farthest recesses of our minds. I seriously haven’t thought about that period of my life until I heard the song again.

You know, I hope that my songs get to be the carriers of memories in your mind!